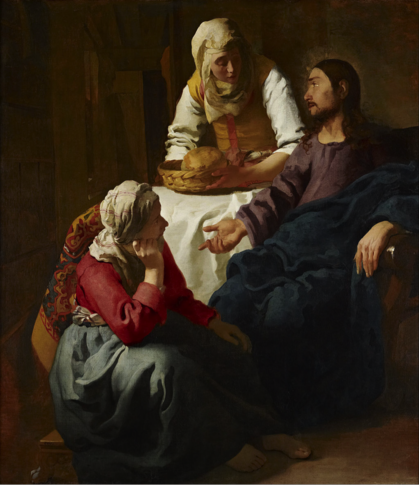 The Gospel deals in the Logic of Love

Six days before Passover Jesus came to Bethany, where Lazarus was, whom Jesus had raised from the dead. They gave a dinner for him there, and Martha served, while Lazarus was one of those reclining at table with him. Mary took a liter of costly perfumed oil made from genuine aromatic nard and anointed the feet of Jesus and dried them with her hair; the house was filled with the fragrance of the oil. Then Judas the Iscariot, one of his disciples, and the one who would betray him, said, “Why was this oil not sold for three hundred days’ wages and given to the poor?” He said this not because he cared about the poor but because he was a thief and held the money bag and used to steal the contributions. So Jesus said, “Leave her alone. Let her keep this for the day of my burial. You always have the poor with you, but you do not always have me.”

The large crowd of the Jews found out that he was there and came, not only because of him, but also to see Lazarus, whom he had raised from the dead. And the chief priests plotted to kill Lazarus too, because many of the Jews were turning away and believing in Jesus because of him.

Jesus is the strong man who attacks and overcomes Satan, who takes away the armor on which he relies and divides the spoils.  What then are the spoils that Jesus takes back from Satan? Chiefly, it is souls Jesus takes back. The Lord comes to reclaim human souls from darkness and bring them into His marvelous light. None can withstand His power. The evil one does not have a chance when the Lord comes to reclaim what rightfully belongs to Him. This then is the context for the spiritual combat that you and I are engaged in brothers and sisters. The Lord who is in us is stronger than the evil in the world (1 John 4:4).

Remember that the Gospel is a reminder that the logic of love and the logic of efficiency are often different. Mary anointed the feet of Jesus with costly perfumed oil and dried them with her hair. Judas objects that the oil should have been sold to feed the poor. Now the Scripture tells us that Judas was not sincere in this statement but wanted to steal the money for himself. But let us suppose that Judas was sincere. His objection to an act of love, to preparing Christ for His burial, is that the money could have been spent helping others. Taken to the extreme, this logic of efficiency, of maximizing the use of our resources, kills the fruitfulness of love, which is spontaneous and sometimes splurges on a nice meal for a friend, or a bouquet of roses for one’s wife, or a college education for a child. To be preoccupied with efficiency destroys love, whereas love, if it is true love, will always pay attention to making good use of resources.

Christianity is not about a mass project to help the world; it is about living the life of Christ and sharing that divine life with others.  We should not mistake efficiency and mere social action for true love.