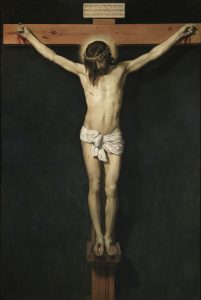 So they took Jesus, and, carrying the cross himself, he went out to what is called the Place of the Skull, in Hebrew, Golgotha. There they crucified him, and with him two others, one on either side, with Jesus in the middle. Pilate also had an inscription written and put on the cross. It read, “Jesus the Nazorean, the King of the Jews.” Now many of the Jews read this inscription, because the place where Jesus was crucified was near the city; and it was written in Hebrew, Latin, and Greek. So the chief priests of the Jews said to Pilate, “Do not write ‘The King of the Jews,’ but that he said, ‘I am the King of the Jews’.” Pilate answered, “What I have written, I have written.” When the soldiers had crucified Jesus, they took his clothes and divided them into four shares, a share for each soldier. They also took his tunic, but the tunic was seamless, woven in one piece from the top down. So they said to one another, “Let’s not tear it, but cast lots for it to see whose it will be, “ in order that the passage of Scripture might be fulfilled that says:

They divided my garments among them, and for my vesture they cast lots.

This is what the soldiers did. Standing by the cross of Jesus were his mother and his mother’s sister, Mary the wife of Clopas, and Mary of Magdala. When Jesus saw his mother and the disciple there whom he loved he said to his mother, “Woman, behold, your son.” Then he said to the disciple, “Behold, your mother.” And from that hour the disciple took her into his home. After this, aware that everything was now finished, in order that the Scripture might be fulfilled, Jesus said, “I thirst.” There was a vessel filled with common wine. So they put a sponge soaked in wine on a sprig of hyssop and put it up to his mouth. When Jesus had taken the wine, he said, “It is finished.” And bowing his head, he handed over the spirit.

Jesus reigns from his throne upon the cross. The sign above his head, written in Hebrew, Latin and Greek proclaims him the King of All the Nations, accessible to all peoples. His salvation and love are for us all—for the rich and poor, the homeless and hopeless, those we love and those who have hurt us. There is no one beyond the reach of His saving mercy. “I thirst”, he exclaims, and He thirsts deeply for our love. He thirsts for us to turn to His cross and discover there the source of life and healing, and not simply a cause of pain and suffering. Let us allow our King to rule over our hearts and find solace in our love. May we satiate his thirst—not by doing great deeds or accomplishing great things, but by letting go of our fears and allowing Him to love us profoundly. May we accept the love and redemption he offers today from His throne upon the cross.

Spend time in prayer and silence today, contemplating with gratitude the love of Christ on the cross.