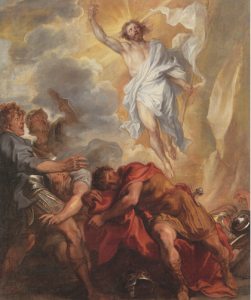 The Lord has risen, let us rejoice! In the early morning shadows of that first Easter Sunday, the sorrow of Mary of Magdala and the Disciples becomes first confusion, then awe, and finally rejoicing at the appearance of the Risen Lord. Our lives here on earth are so often filled with tears confusion, but we must fix the gaze of our hearts on the Lord who is truly risen, and be constantly renewed in joy and hope. As Pope Benedict so beautifully said in his 2011 Easter message:

“Dear brothers and sisters! The risen Christ is journeying ahead of us towards the new heavens and the new earth (cf. Rev 21:1), in which we shall all finally live as one family, as sons of the same Father. He is with us until the end of time. Let us walk behind him, in this wounded world, singing Alleluia. In our hearts there is joy and sorrow, on our faces there are smiles and tears. Such is our earthly reality. But Christ is risen, he is alive and he walks with us. For this reason we sing and we walk, faithfully carrying out our task in this world with our gaze fixed on heaven.”

CMF CURO’s prayer for you, at the end of this Lenten journey, is that you always be filled with the Peace and Joy of Jesus Christ, and allow him to transform your tears into dancing!